This blog post starts a series of posts describing the graphic output of the logging software I authored for my Outback Solar off grid power system.


For now don't try to read the text on the axes as I want to describe the "at a glance" features of the daily report.

GREY area is 240V AC load (FX1)
The GREY filled area represents the 240V AC watts as 24V DC watts going into the Inverter (aka FX) for the house 240V AC power supply. It is below the X axis indicating a load out of the 24V battery bank.

YELLOW area is Solar input (MX2)
The YELLOW filled area represent the 24V DC watts feed into the battery bank by the charge controller (aka MX) from the solar PV panels. It is above the X axis indicating an input into the battery bank.
BLUE area is DC load (DC3)
The BLUE filled area represent the 24V DC watts from the battery bank for the house 24V DC loads. Blue represents the 24VDC water pressure pump and the LED downlights (DC-DC converted to 12V). It is below the X axis to indicate a load out of the battery bank.
BLACK line is Net Watts (Net)
The BLACK line within the GREY and YELLOW areas represent the 24V DC net watts put into or removed from the battery bank. Below the X axis indicates a net load out of the battery bank, when above the axis indicates net charging of the batteries. Net watts are negative at night and positive during charging.
RED line is Battery Bank Voltage (FNBat)
The RED line is the battery bank voltage as reported by the FLEXnet DC unit. On the right hand scale, 252 represents 25.2V. Voltage rises when charging in bulk mode until absorb (29.2V) then voltage is kept constant while net watts decreases exponentially until the return amps value (22.5a) or after the 2hr absorb timer. Charge voltage then reduces to the float (27.2V) until sunset.
BLUE line is State of Charge (SOC) also Depth of Discharge (DoD)
The light BLUISH* line is the state of charge of the battery bank. The SOC rises when charging until absorb is reached when SOC reaches 100% where it stays during float. SOC declines overnight. Left scale is 0=90% - 1000=100% SOC.
* Note: I am colour challenged so "cyan" or "puce" are not in my colour vocab. That's a light bluish line, OK?
YELLOW line is Charging Mode (MX)
The YELLOW line is the modal charging state of the charge controller (MX). It indicates the mode with height indicating relative voltage: Silent, Float, Bulk, Absorb and EQ. Graph shows a typical cycle: Silent-Bulk-Absorb-Float-Silent.


Got all that?
Test yourself by parsing the next full size image. 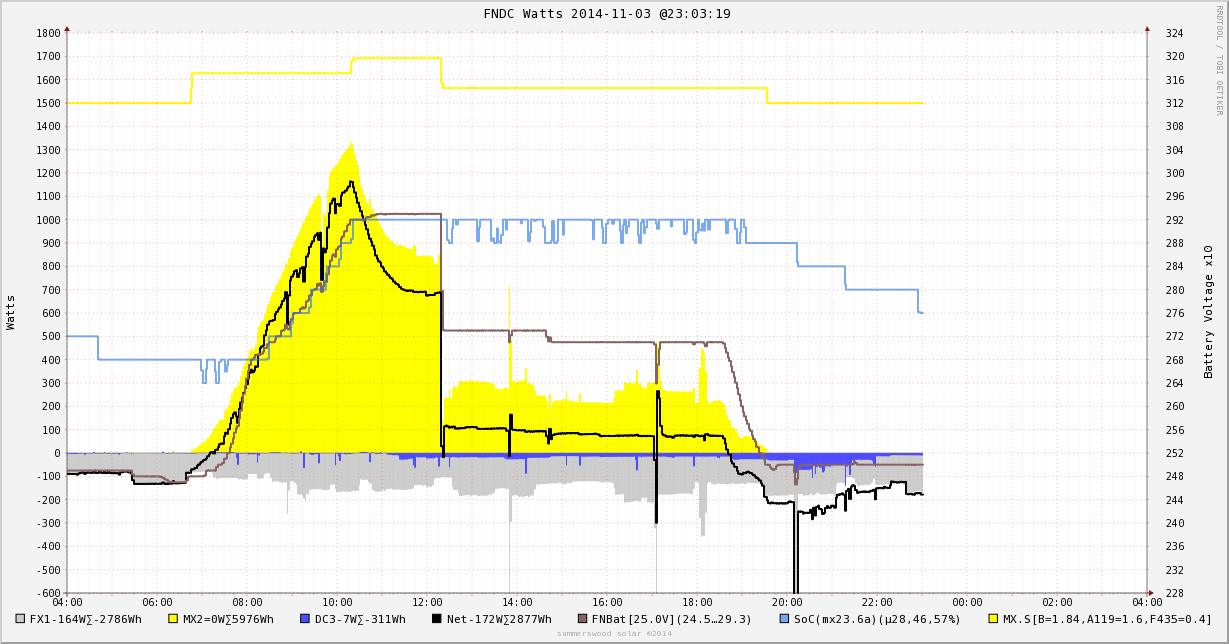 #### A whole post to come on the dismal efficiency of Flooded Lead Acid batteries.

[I have either a solar power Tardis or Blogger doesn't respect my local time]
Posted by SummersWood at 21:15 No comments:

We have been living off-grid since 2006.
Our solar power generation system has been a great success.
I will be explaining certain parts of the PV system in the next series of posts.

Posted by SummersWood at 05:23 No comments: 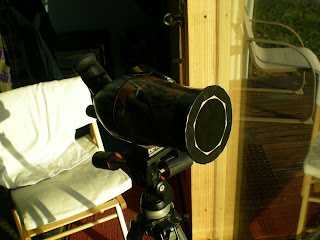 Expected C1 at 8:16 am.
The day dawned with
light cloud on the horizon
but the sun rose above
the clouds into a clear
bright morning.
Weather: Perfect! 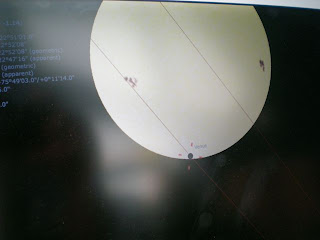 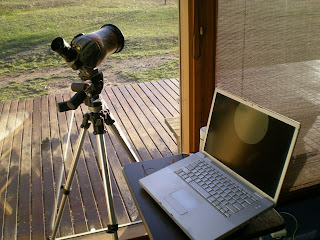 The observation set up.


An early start to wash
the window.
It was 8°C outside. 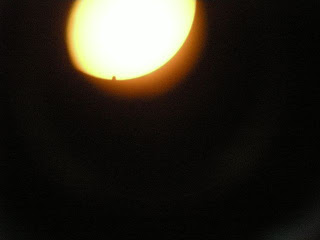 Amazing!
Crude camera shot:
pointing a Nikon S200
down the eye piece.
That bump is Venus!


Followed the transit
until noon then clouds
closed in. Didn't see
the transit exit. 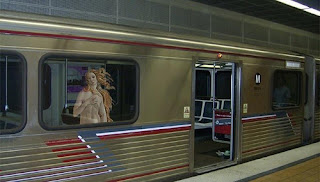 On a lighter side,
here is what some
of the worker bees
would experience :) 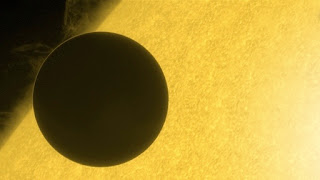 
Beautiful
image from
JAXA's Hinode
space craft
Posted by SummersWood at 03:31 No comments:

This project was inspired by a forum post on whirlpool.
The EnviR transmitter unit uses 433MHz wireless to transmit energy usage data packets to the display unit. The position of the transmitter unit is determined by the length of wire of the clamp, so is limited to about a metre from the measured wire. In my case the wireless signal was severely attenuated by the steel walls of the power room and the display unit showed poor signal quality. The clamp wire could not be extended to place the transmitter outside the room, as its length is tuned for the transmitter. The other option was replace the built in plastic aerial with an external aerial. I need about 1.5m cable to place the aerial outside the metal room. Adding an SMA connection on the transmitter allowed threading the aerial cable through a hole in the siding.
COMPONENTS
Two components were sourced from eBay:
Need only the SMA female nut and the RG174 cable. Discard FME connector.
Warning: Understand the difference between SMA and RP-SMA.
OPTIONAL COMPONENTS
INSTRUCTIONS
1. Open the transmitter back, one screw and remove batteries. 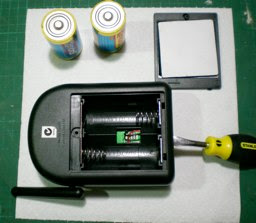 2. Pry open the case using a flat blade screw driver, starting at the bottom, by pushing in above the middle socket. Work left then right, then around the sides. The top will separate last, with a latch in the centre. 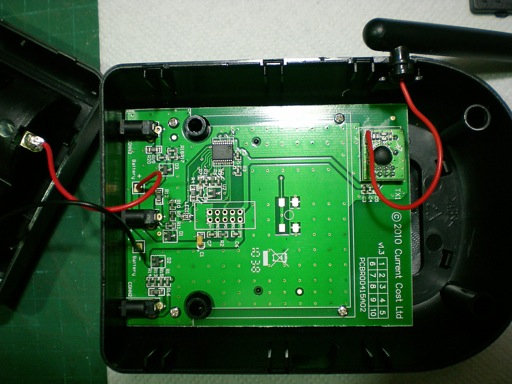 3. Separate the case keeping the bottom edges close, be careful of the red and black power wires. Maybe you won't end up soldering them back on :(
4. Remove wire from plastic antenna. Note where the wire is soldered to wireless board.
5. Prep the SMA nut cable by cutting off the other end so it's about 100mm long and strip the outer insulation at least 25mm. Unbraid the shield and roll it into a wire. The core signal wire is cut about 16mm length and 8mm stripped of insulation, leaving 8mm insulation. Tin both wires lightly. The shield wire is tinned from the end until 5mm before the insulation. Don't tin further as it needs to bend and best not melt the insulation. Inspect and trim any straggler strands.
6. Test fit the SMA nut into the case before soldering. Enlarge the aerial hole in the case a little bit with a small round file or scrape with a knife. Test fitting the nut a few times requires closing up and prying open the case each time. With care the power cables won't snag, pinch or break.
7. Remove main board, 4 screws. The battery case is attached and care with the power cables is again required. 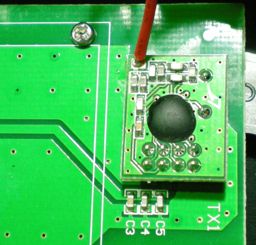 8. Notice there are many tiny holes in the main board which connect to the ground plane. There is one hole on the main board close by the signal connection on the wireless board. Drill that hole open with a 2mm drill and scratch away a bit of coating on the back to get fresh copper trace for soldering the shield.
9. Unsolder the original aerial wire and solder the new signal wire through the board, clip off extra length. Solder the shield wire into ground plane, soldering at back of main board, clip off extra length.
10. Replace main board into case, 4 screws. Final fit SMA nut and route cable to the top of case. 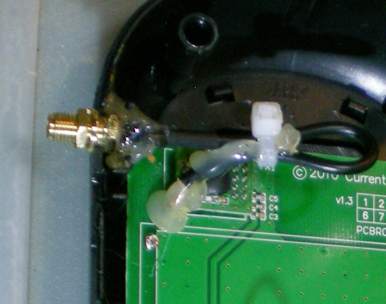 11. I used hot glue to fix the SMA nut to the case so it resists turning and used a tie plus hot glue to immobilise the soldered end of cable.
12. Assemble transmitter and tighten SMA nut with lock washer.
RESULTS
Preliminary:  The 14.1cm aerial with 1.5m cable has not yet arrived. Tested with a 3G aerial (34cm long is wrong for 433MHz) with 3m cable connected to transmitter.
The result: Absolutely fabulous, despite the mismatched aerial.
The important part was to get the Tx signal out of the metal enclosure. Received signal has no dropouts everywhere inside metal clad house, in places where no signal registered before.
CONCLUSION
Success.
Posted by SummersWood at 05:20 5 comments:

Email ThisBlogThis!Share to TwitterShare to FacebookShare to Pinterest
Labels: envir

(Always an easy starting point for a programmer...)

I've taken the plunge and started this blog, as what I say may be slightly more relevant than most :)


Now, just a quick word from our sponsor

Stay tuned for off-grid solar-powered living down-under (it's fabulous),
ruminations on climate collapse, (oil, schmoil, we are all gonna boil)
some rough and ready dharma (me) and more refined mindfulness (her)
and general geeking out in a sustainable solar powered lifestyle....
Posted by SummersWood at 19:14 No comments: